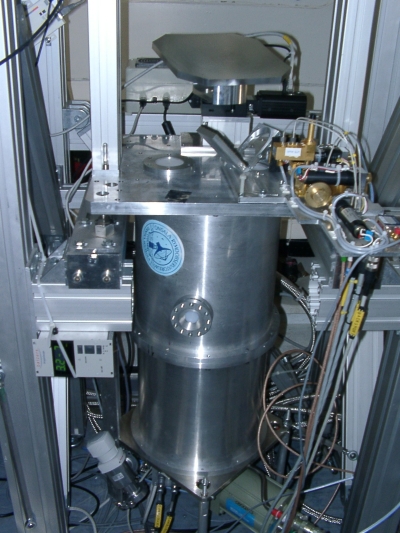 The APEX 345 GHz heterodyne receiver (delivered by GARD at Onsala Space Observatory, Chalmers, Sweden) was commisioned during the summer of 2005. The first regular observations took place during the fall at 2005. It is operating in double sideband (DSB) mode with an intermediate frequency (IF) of 6 GHz and its tuning range is 279 GHz to 381 GHz. The DSB receiver temperature (about 60-70 K) is fairly constant over the entire tuning range. The telescope beam size at 345 GHz (image band at 357 GHz) is determined to 17.5”. The tuning of the receiver is done remotely . The following picture shows the receiver on the telescope. To see a picture of the mixer block and cold LNA, click here. The receiver and telescope optics can be found here.